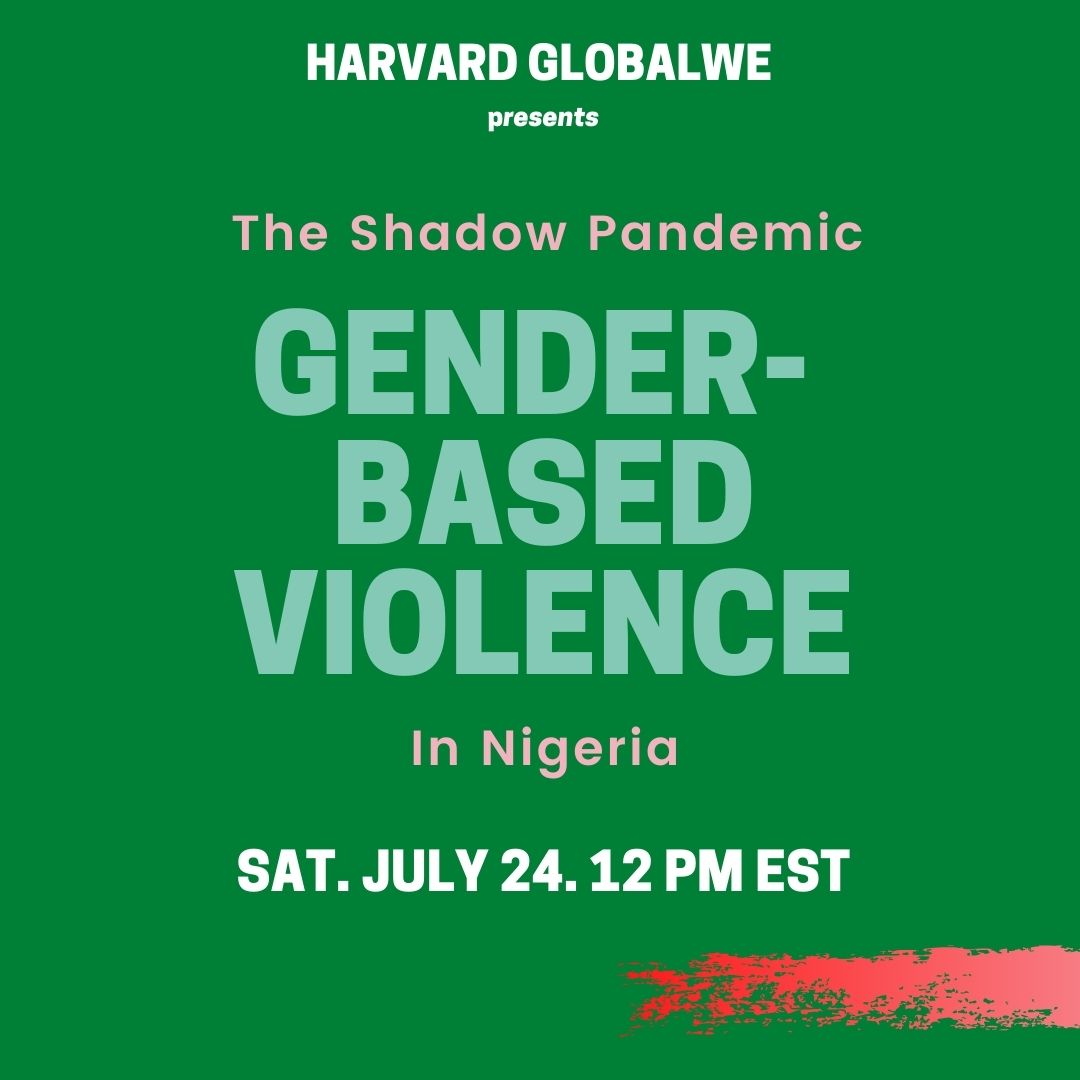 Harvard GlobalWE invites you to join for a panel-based discussion on The Shadow Pandemic: Understanding Gender-Based Violence in Nigeria. The event will be held via Zoom on Saturday July 24th at 12 pm ET/ 5pm (GMT+1).

On April 29, 2021, in Nigeria, a young female graduate who went in search of a job was raped and murdered by a man who had posted a fake job opening on Twitter. Seven years earlier, in April 2014, the world woke up to the shocking news of the kidnapping by Boko Haram of 276 female students aged 16 – 18 years from a secondary school in Chibok, Borno State, Nigeria. While a majority of the students have been rescued in the years since then, well over a 100 of the girls are still missing. As tragic as the two cases cited here are, they are sadly, not altogether rare occurrences in Nigeria today.

This panel discussion will shed more light on gender-based violence in Nigeria and its effects on victims and society as a whole. Panelists include Dame Pauline Kedem Tallen, Honourable Minister, Federal Ministry of Women Affairs and Social Development, Nigeria; Dr. Oby Ezekwesili, a Co-Founder of the #BringBackOurGirls Movement, a group of diverse citizens advocating for the rescue of the schoolgirls that were abducted in Chibok; and Aisha Yesufu, the immediate past Chairperson of the strategic team of the #BringBackOurGirls Movement. The discussion will be moderated by Harvard GlobalWE member, Dr. Isang Awah. 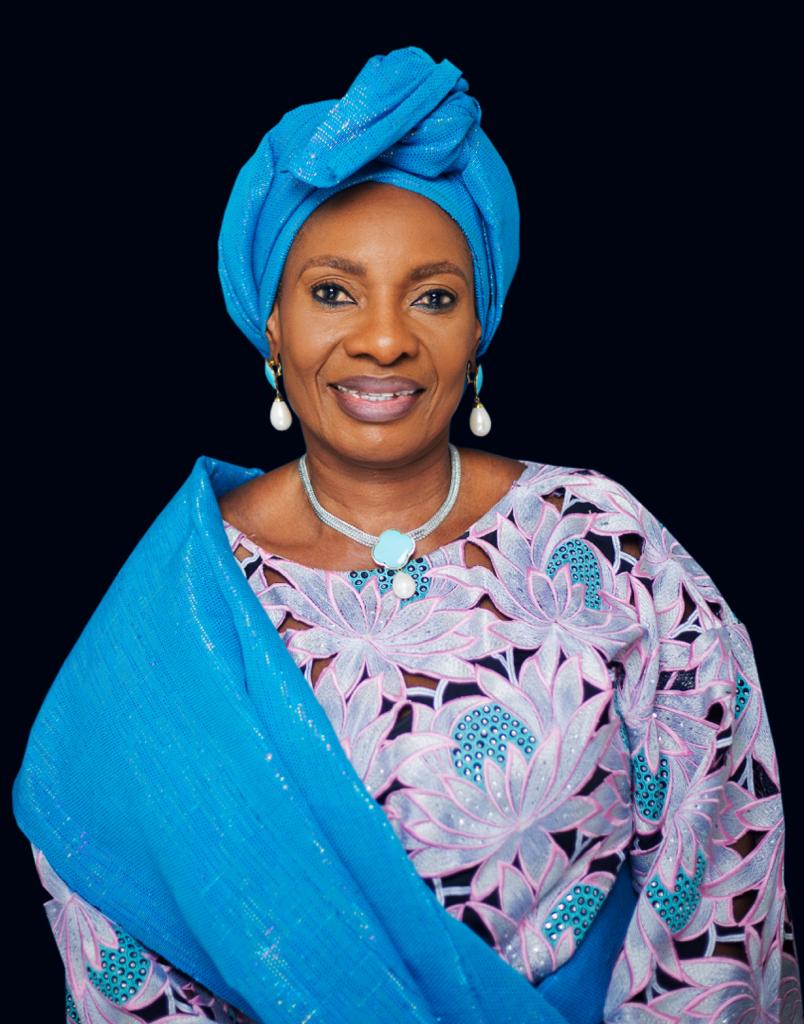 Her Excellency, Mrs. Pauline Kedem Tallen OFR, KSG is presently the Honourable Minister, Federal Ministry of Women Affairs and Social Development, Nigeria. She has previously served as the Honourable Minister of State, Federal Ministry of Science & Technology, Nigeria, and the Deputy Governor, Plateau State (first female Deputy Governor in Northern Nigeria). Her numerous awards include World Ambassador of Peace, Inter-religious and International Federation for World Peace (October 2000); National Honour, Officer of the Order of the Federal Republic, OFR, by His Excellency, President Olusegun Obasanjo GCFR (2005); and African Icon of Our Generation Award 2015 (Woman of the Year Award) Presented by International Center for Comparative Leadership for Africans and Blacks in Diaspora and Accolade Communications Limited. Dame Tallen has a Bachelor of Science in Sociology at the University of Jos. She also attended a programme for Strategy Public Sector Negotiations at the John F. Kennedy School of Government, Harvard University, U.S.A. 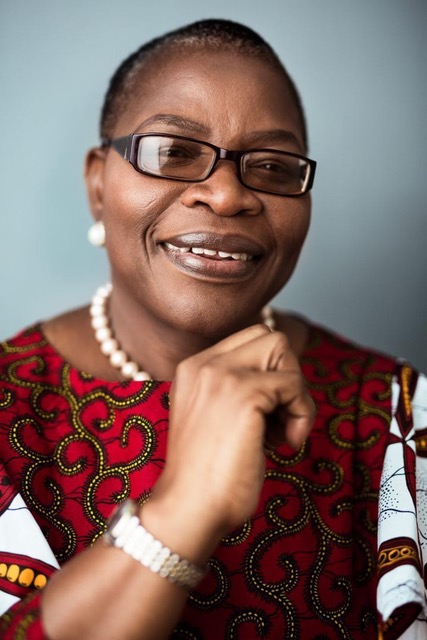 Dr. Obiageli “Oby” Katryn Ezekwesili was a candidate for the office of the President of Nigeria in the 2019 election. She is an Economic Policy Expert / Senior Economic Adviser, Africa Economic Development Policy Initiative (AEDPI) and CoFounder of #BringBackOurGirls Movement, Nigeria. Dr. Ezekwesili is the founder of #FixPolitics, a research-based citizen-led initiative that envisions “A country where politics is inclusive, the needs of citizens are prioritized, democratic principles are respected, such that good governance is the norm”. Dr. Ezekwesili was recognized as one of Time-100 Most Influential People and by New York Times as one of the 25 Women of Impact, 2015. Albert Einstein's Foundations named her one of 100 visionaries featured in the 3D book "Genius:100 Visions of the Future”. Dr. Ezekwesili is a globally renowned Speaker. She was also a 2018 Nobel Peace Prize Nominee; and has received several other local, national, and international awards. She was decorated with the Highest medal in Nigeria, the national award of Commander of the Order of the Federal Republic (CFR). Dr Oby recently completed a six months stint as a Richard von Weizsäcker Fellow at the Robert Bosch Academy in Berlin Germany. 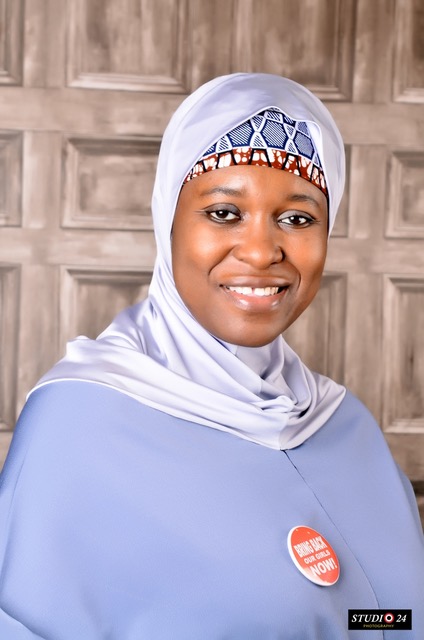 Aisha Yesufu is an active Nigerian citizen who is unapologetic about her fight for justice and equity. She is a businesswoman who teaches financial literacy to empower people and also guides them to demand good governance. She is a member of the #BringBackOurGirls movement that has been advocating for the rescue of schoolgirls who were abducted from their school in 2014. She is the immediate past Chairperson of the strategy team of the movement. Aisha Yesufu was part of the #EndSars protests that took place in Nigeria which were aimed at putting an end to police brutality. She was dubbed the statue of liberty for her courageous stance in defying the attacks on citizens by the police during the protest. She was also named one of BBC's 100 Women of 2020, a list of 100 inspiring and influential women from around the world. 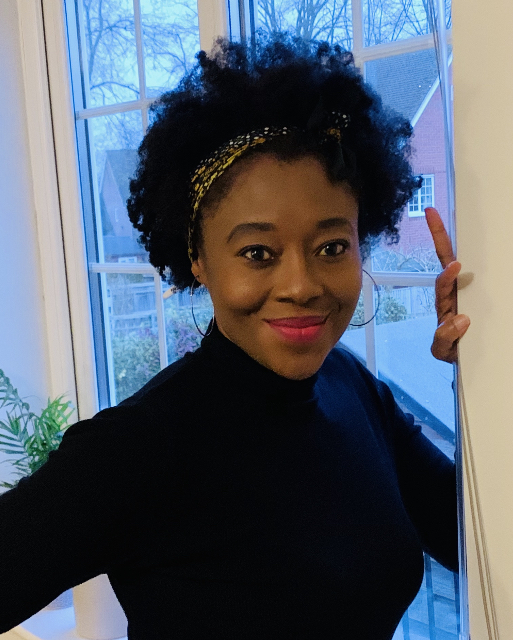 Dr. Isang Awah works in Oxford University’s Department of Social Policy and Intervention. She specifically works on the development of the digital version of Parenting for Lifelong Health (PLH), which is a suite of open access, non-commercialised parenting programmes to prevent violence, including gender-based violence, in low-resource settings. Her research interests include social issues and literacy especially in developing countries. She has over a decade of experience in researching with children and young people and has carried out studies on various topical issues such as the effects of verbal abuse on female domestic servants in Nigeria. Isang holds a PhD in Education at the University of Cambridge. She also holds degrees from Harvard University, U.S.A. and the University of Uyo, Nigeria. As founder of MyRainbowBooks Limited, she introduced in Nigeria personalised storybooks that are tailored for African children and initiated the nationwide annual creative writing competition for children.

Views: During our events, we expect our participants to be respectful of one another's opinions and experiences.

The views expressed during our events are solely those of the speaker(s) and participating audience and do not imply endorsement by Harvard GlobalWE and/or Harvard University.

Harvard Alumni For Global Women's Empowerment Harvard GlobalWE is a shared interest group of the Harvard Alumni Association.
We are dedicated to the empowerment of women through education, dialogue and connection among individuals working for women's rights and freedoms worldwide. Harvard GlobalWE does not advocate a specific ideology or political or cultural agenda. We are an inclusive organization with membership open to and comprising all genders.

Membership is free. To become a member of Harvard GlobalWE, please JoinWE. To learn more, please visit our website and our Facebook group.

Back to Top of Page